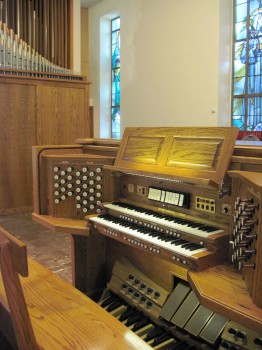 The original custom 11 rank Wicks all-pipe organ was installed in 1979, and was renovated and expanded significantly in 2001. The current organ has a total of 41 voices created by 17 pipe ranks and 16 digital voices. In addition to the significant improvements in voicing and expanded ranks in the gallery, a floating digital antiphonal division was installed in the front of the church over the baldachino. This division allows the Cantor, Ministers of Liturgy, and Congregation seated in the front of the church to hear the organ at the same time as those seated in the rear.