Congregation has been dissolved; church (Tower Grove Abby) is shared among multiple congregations on Sundays. Weekdays the building is used for a theater. 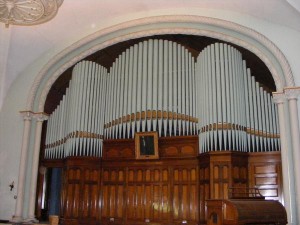 History of the organ is unknown. Signs show the original instrument was tubular pneumatic with a center attached console. It would have been a two manual instrument. The Great and Choir (former swell) divisions were slider/pallet chests on the same supports. Later it was updated to electro pneumatic action for the slider chests. The current 10 rank ventil chest swell division was added most likely the same time.
Updated February 25, 2008