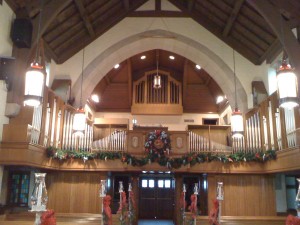 Designed by Paul Bunjes, River Forest, IL. The original organ at Salem was buried behind a wall and grillework, causing the sound to have to up, then out, and then had to pass through an archway. When the new organ was installed, a curved wooden ceiling was added to assist in projecting the sound outward. The Chor division was placed where the old grillework had been. The Pedal and Great divisions were built outside the archway, and became the balcony rail, as such. The Pedal and Great mirror each other in design, with the low 12 notes of the Principal, and the low 6 of the 8' flutes making the facade on a 90-degree angle, parallel to the nave. The "rail" portions of the case work contain the Pedal and Great divisions, with the Pedal to the left of the organist, and the Great to the right. This design brought the Great closer to the congregation, making it more suitable for leading congregational singing. The organ is supplied by three separate blowers, one for each division. Each stop is completely independent. It has 6 general pistons, and 5 per manual division. The Pedal only has 4 divisional pistons. A zimbelstern was added recently. I had the opportunity to speak with Dr. Bunjes about this instrument, and he said to me "Oh yes, I had to stand on my head to design that one!"