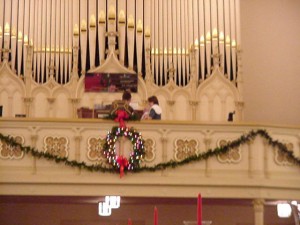 The organ had a major rebuild in 1924, the end result of which is more of what the instrument is today. In 1950, the sanctuary was remodeled and the organ was rebuilt again. In 1981, Martin Ott replaced a few ranks and rebuilt the console. The last thing done was in 1998 when then non-AGO standard console was replaced with an AGO-standard by Robert G. Dial-Organbuilders. The organ has limited ability for borrowing, so the additional stops were added mostly from the 16' Open Diapason, and the 8' Trumpet in the Great. The rest of the stops are on straight ventil chests. The keyboards were the only things re-used from the original console since they were in such great shape. Mr. Dial refurbished them, added the new piston buttons, and reinstalled them into the new console. The photos below show both the old and the new consoles.