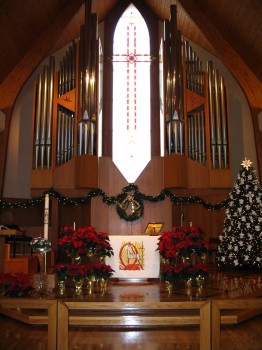 Designed by Dr. Paul G. Bunjes, River Forest, IL. This organ was installed with the new sanctuary, replacing a 4-rank Wicks, which was in the previous sanctuary. The entire organ has metal pipework, with the exception of notes 1-12 in the 16' Gedacktbass, and the 16' Holzposaune which has all wooden resonators and boots. The first 12 Gedacktbass pipes are on an offset chest in the top of the pulpit-side tower. The Great division is below these pipes on that side. The Pedal is contained in the lectern-side tower, with the enclosed Chor beneath it. The two prepared ranks were installed in summer of 2011, and the only prepared rank remaining is an 8' Trompete en d'hors. The only evidence that this rank was to be done is the third, unused manual and a blank draw knob on the console. The lowest of the three manuals is the Great, with the Chor in the middle, and the top non-functioning keyboard as a solo division. There is no existing case work or chest for these horizontal trumpet pipes, nor does there seem to be any extant designs of how Dr. Bunjes wanted this to be installed. However, it is thought that each side of the "V" between the two cases would have been the location he had in mind. The facade is composed of the Pedal 16' Prestantbass, notes 1-28, which would be all of the facade pipes on the lectern side, plus the six tall ones on the Pulpit side. This rank also extends to 8'. The smaller case pipes on the pulpit side are the 8' Prestant in the Great, notes 1-16. The entire organ is supplied by a single blower, located under the Great division. The Zimbelstern has a rotating star, but the bells themselves are on the far left of the picture, behind the first three case pipes. There is a 32-memory combination action system, with 8 generals, and 4 divisional pistons per division. 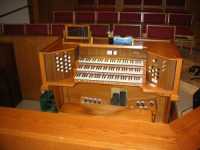